What Gives With The New Google Mobile Algorithm?

Wow. All of sudden you’re hearing rumors how Google is about ready to unleash another algorithm update and wondering huh? Relax, it’s all good. Well, kind of sorta.

Here’s the dealio. You got a site. It’s probably old, clunky and some dude designed it years ago. Now you’re being told it will no longer support your business if it’s not mobile-worthy. True? Yuppers. Why bother upgrading it to a mobile responsive design? More importantly, who cares right?

But only if you care how your site displays on every conceivable device known to mankind. Tablet, smartphone yadda. Think less about spending a boatload of money doing it. Oops. As long as your current site isn’t built with one of those dumb quick and easy gimmicks such as Godaddy’s pagebuilder (formerly known as website tonight).

Warning: you may even have an ancient HTML site. What on earth is that? Think old school design. Lotta code, very hard to edit yourself and relies on hiring goofy site coders who must edit code line-by-line to update.

Listen, this new Google mobile algorithm isn’t news. Actually, they’ve been telling everyone for more than two years to get ready for mobile. Why should you care? With more than 36% of all online traffic coming from mobile devices, you’re going to one day wake up and realize more than half your prospects cannot even view your site while chilling in front of the TV with their phone.

The following graphic gives you a quickie view on how mobile sites designed properly look versus your old clunker: 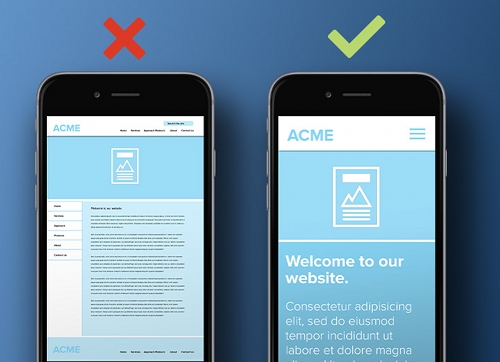 Do you know the the three things that will impact your business in the next five years?

What is a responsive website? Simple. It’s how your site drives your content and then serves it up to your users no matter what kind of device they have hard-wired into their hands. But it gets worse.

If you have organic rankings on Google you’re doomed if you pass on responsive. They will be giving preferential rankings to sites that have responsive mobile sites. Damn man right? Bingo.

Listen, it’s not rocket science. But if you’re ready to get real and join the mobile site game, do yourself one big, fat favor. Think about converting your site to WordPress. If you already have it, congrats.

Now think about converting your site to a mobile WordPress theme. The site you’re on right now has been mobile responsive since 2012. I personally use the Divi theme by Elegant Themes. It’s a beast of brilliance and has all the bells and whistles to make your site more enticing.

No time or money ? Relax, there’s a way to cheat your way to mobile. Think dude. As in DudaMobile. They can capture a copy of your site and convert it to a mobile version in minutes. Expensive? Nope. Cheaper than ice cream for the kids. Here’s what they do… 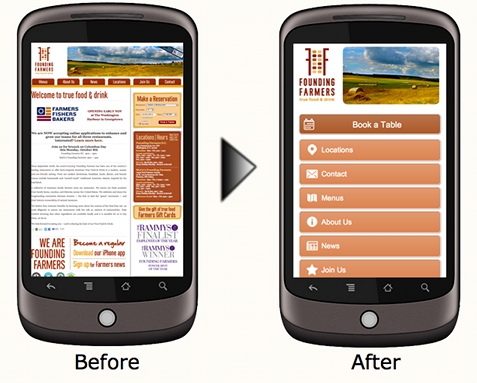 What I love about Duda is they host the mobile version of your site on their server. Once you have your account set up, you can go in and tweak the content you want to display on your mobile site.

Lastly, text-based sites are slogging along these days. People have so little time to read. Therefore, video is a must to have on your site. Wowsa–way too expensive and complex?

Not anymore. Depending on who you hire to produce your video, count on $250-$500 per video. But don’t pull the trigger too fast without kicking a few tires. Most video geeks use schlocky software that generates dorky animated lame videos. Remember, this is your company. Your brand. Don’t simply toss out a goofy video for the sake of getting in the online video game.

Instead, focus on your story. Here’s a few videos I’ve produced for my clients.